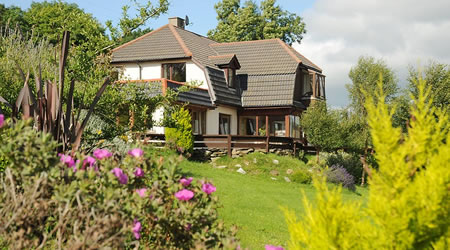 Lough Dan House is a cosy B&B, set in the beautiful Wicklow Mountains National Park.  It is the perfect mountain hideaway, and an ideal spot for outdoor activities such as walking, fishing, horse-riding and much more. This magnificent landscape has inspired painters, poets and nature lovers for centuries. Lough Dan House is the perfect base to explore the mountains, experience the local culture or simply enjoy the peace and quiet of the countryside. It also offers a central location for the heritage enthusiast, with lots of garden exhibitions and historical attractions to explore.

We stayed three nights at Lough Dan House in the Wicklow Mountains is an ideal location to explore this wonderfully picturesque area of Ireland. On arrival we were warmly welcomed by Teresa who showed us to our room which overlooked Lough Dan in the valley below. The house and room were immaculately clean. The evening meal with free wine was excellent as was the full Irish breakfast on offer each morning. The house is very secluded and surrounded by open countryside. The Wicklow way runs close to the house making it an ideal overnight stop for walkers. A five minute drive takes you to the Village of Roundwood with many good pubs and restaurants.  A resident fox made two appearances just outside the lounge at the front of the house. There are badgers nearby, although we did not see them. Swallows and house martins swoop around the house and various warblers sing in the wooded area at the rear of the house. Theresa and Sean were always on hand to give advice as to the best places to visit. Overall a great place to stay or a peaceful retreat or a base to explore this wonderful area. Highly recommended. 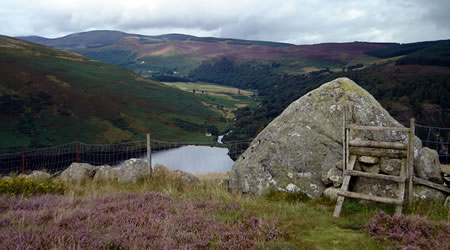 Wicklow Mountains National Park amounts to over 20,000 hectares of upland mountain scenery.  Situated on the doorstep of Dublin the landscape is wild and beautiful.  The Wicklow Mountains are famous for granite rock which runs in a line of peaks with expansive corries gouged out of the flanks of the higher summits.  Special features of the area to the east of the spine are the glacial valleys, such as Glendalough, that penetrate from the mountain range.

Lough Dan is the largest and least inhabited of these valleys and contains two lakes, spectacular waterfalls, steep corries, slow meandering rivers, white sandy beaches and remnants of primeval oak woodlands that once covered most of Ireland.  Also to be found at Lough Dan are a number of village settlements which were decimated following the great famine which saw the population of Ireland reduced from eight million to a mere two million, 150 years ago. 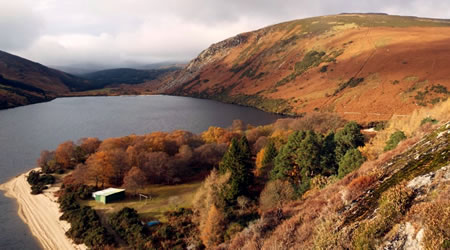 Lough Dan is a spectacular ribbon lake, which is situated beneath Knocknacloghogue and Kanturk Mountains. The Cloghoge valley is a typical U-shaped valley. Arctic Char Salvelinus alpinus was last recorded in the lake in 2004. This fish is the one of the oldest inhabitants of Ireland, it was considered extinct here until recent evidence was produced indicating the species still exists in Co. Wicklow. There are Peregrine Falcon sites on the steep cliffs overlooking the lake on the eastern side, and some lovely broad-leaved woodland in the Inchavore Valley. The Cloghoge and Inchavore Rivers are rich in invertebrates and breeding Dippers and Grey Wagtails can be seen around the river. Herons and Cormorants roost near the mouth of the Cloghoge River. The Valley is a haven for wildlife, Deer, hare, rabbits and otter may be seen, while red grouse, hen harrier, snipe, pheasant, merlin and many other species are still resident

The entire area is protected as a Special Area of Conservation, a European designation. 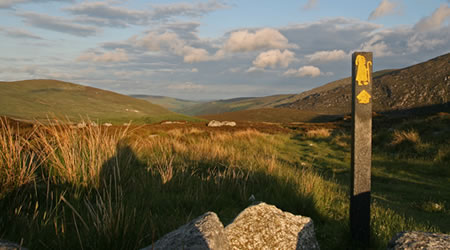 The “Wicklow Way” Ireland’s first long distance walking route (130 kilometres) is part of a network of long distance self-guided walking tracks throughout Ireland.  It’s easily accessible with a wide variety of scenic experience, much of it in truly remote areas.  The “Way” is the most westerly part of the E8 footpath which extends across much of Europe and overlooks the shores of Lough Dan, as it winds its way trough Wicklow from Marley Park in Dublin to Clonegal in Co. Carlow.

The St Kevin’s Pilgrim Way runs some 50 kilometres from Hollywood in west Wicklow to Glendalough, the oldest ecclesiastical city in Europe, which was founded by St Kevin in the fifth century.  It was used for over one thousand years by pilgrims from other parts of Ireland making their way to pray at this holy city. Glendalough is only 5 kilometres from Lough Dan House.

With such variety of routes on the doorstep to choose from, and all your holiday requirements taken care of, “Lough Dan House” is a perfect location for any walking holiday.

We use cookies to ensure that we give you the best experience on our website. If you continue to use this site we will assume that you are happy with it.OKPrivacy Policy